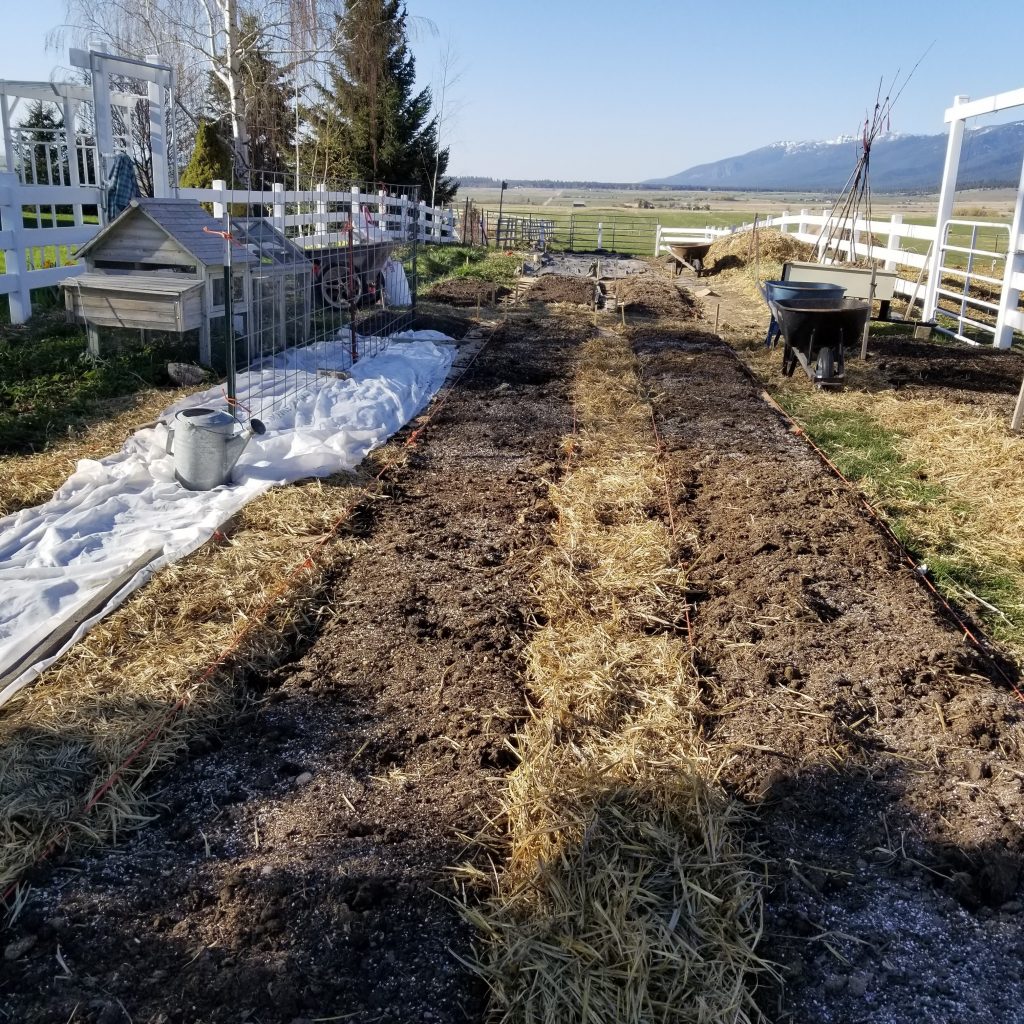 We are transitioning our conventional organic garden to a regenerative organic no-till garden. Many changes will have big effects! We are using heavy compost to form permanent beds and continue to build organic matter. We are using heavy mulches between rows to reduce weed pressure. Cover crops that add organic biomass, fix nitrogen in the permanent beds, cover and protect the soil are planted in fallow areas and at the base of crops. Tarps were used over the winter and early spring and until beds are created or planted to reduce weed pressure by smothering weeds and weed seed. We will post progress throughout the transition…wish us luck as it feels like we are in totally new territory..the learning curve is high! 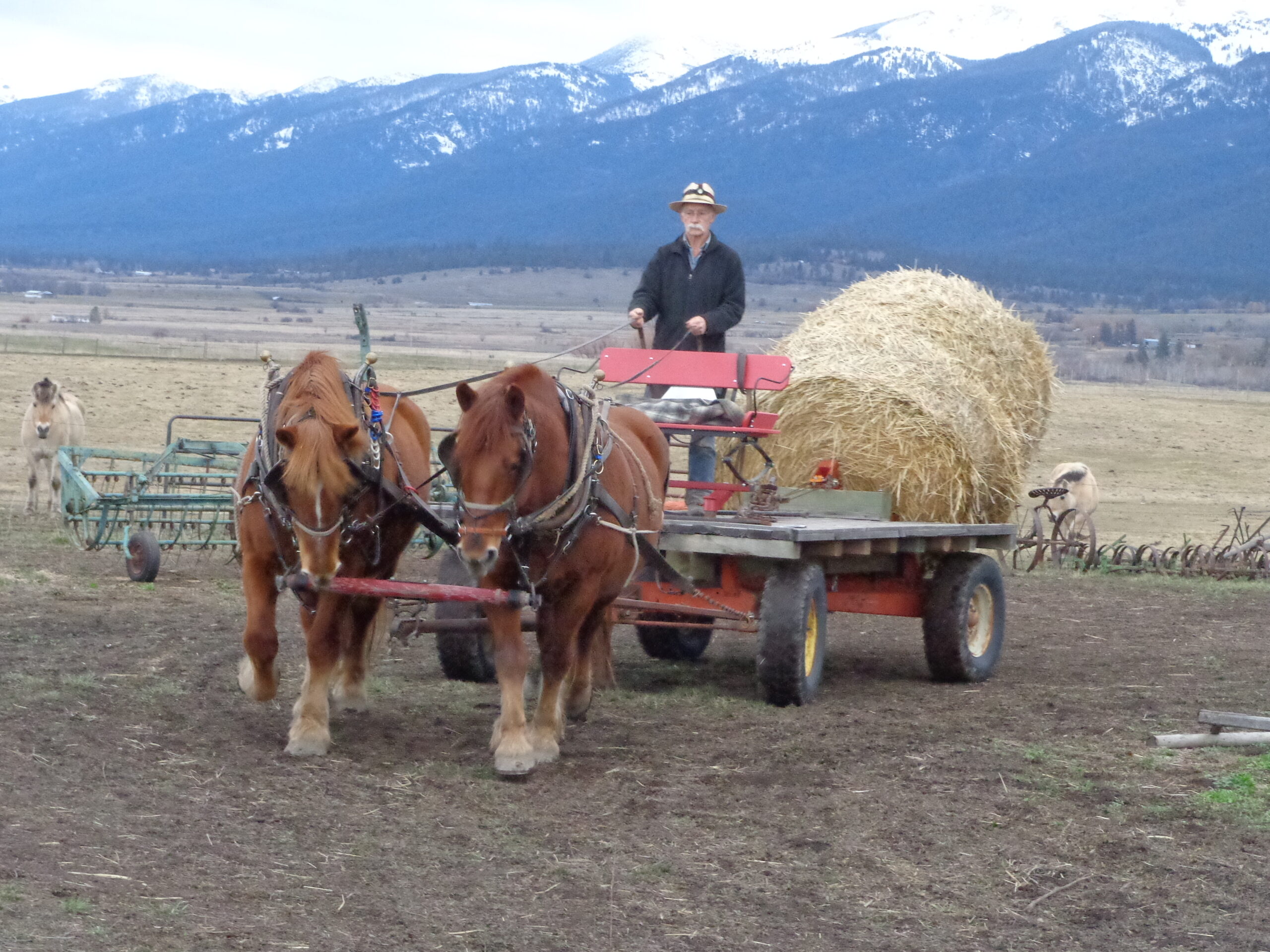 We use our horse-drawn bale moving wagon regularly on the ranch to move bales!

We purchased the wagon as seen here. It was made by the seller, who assembled components to make a very useable and maneuverable wagon.

It has Gehl running gear and is shortened to a 10-foot bed length. It has a new Pioneer Equipment bench seat and a new Pioneer cast toolbox is bolted on the bed, which was also new lumber when we purchased it. A modern bale spike assembly was mounted on the back, and when we purchased it, it had a high-capacity Warn winch (with remote operation !) mounted on it to run the bale lift mechanism. We replaced the battery-operated winch with a hand-operated come-along to lift the bales. Wedecided to use the winch on another piece of equipment where we could use the high capacity power. The hand operated come along works just fine, however, we’ve considered mounting a smaller battery operated winch to operate the lift mechanism. The wagon with a short wheel base is highly maneuverable which is incredibly helpful in our equipment yard, hay yard, and driveway accessing  our covered hay storage.

This side view shows the ‘bale spike’ mounted on the back. This component was purchased and added to the back of the flatbed wagon.

The bale-spike is mounted on the long stringers that support the wagon bed. It is mounted to the stringers and pivots up and down between them, as shown in the photo below. The short spikes on either side of the long spike keep the bale from rotating -stabilizing it.

We use a piece of plastic PVC pipe placed over the long spike to protect people and animals from the pointed spear when it is not being used to carry a bale. The PVC piece is just enough larger than the spike so that it comes off easily just before spearing the bale and goes back on the spike just after the bale is dropped. We always carry the PVC spike cover on the wagon when moving the bale so it can go back on the spike immediately after the bale is dropped.

The spike is set horizontally as the wagon is backed up to spear the bale.

When purchased, the wagon had a large 12-volt battery-operated winch on it. We moved that winch to another piece of equipment and replaced it with a hand-operated come-along.

Doc winches the bale up into a position that will hold it on the spike as he travels. In rough or irregular ground, we go slow, taking it easy so the bale doesn’t get to bouncing, giving special consideration to the horses, who would feel any bounding by the wagon and load.

If you have questions or comments, please feel free to call

We feel privileged to have recently shared our home for a visit from Jay and Janet Bailey,  of Fair Winds Farm, for a couple of days. The Baileys live in Vermont, own and operate a horse-powered, organic market vegetable farm.  Like us, the Baileys also offer intensive, hands-on horse-powered workshops that teach people how to drive and work horses in harness.

We and the Baileys both admire, own, and use Suffolk Punch Draft horses in our personal farm work and in our workshops. We had much to talk about with this love in common…our own horses, their tractability, their energy, their great minds, and current trends in breeding. It was a great time for the Baileys to learn about the other breed of horses we own and use on the ranch and in our workshops, Norwegian Fjord Horses.
The time together with the Baileys also gave the four of us the opportunity share, connect with resources, and network with each other about what opportunities, information and activities we provide (and would like to provide for Workhorse Workshop students). We want to stay connected to help each other provide the best educational experience possible for all of our combined current and future students.
Jay and Janet were interested in local history and had not heard of spring-board notches.  (Loggers in the early days cut springboard notches into which they could insert springboards which then could be used as platforms, allowing the loggers to stand and use their cross-cut saws to cut higher-up the base of the tree where the trunk is narrower.)
We spent some time hiking with them near the ranch to show them the remnants of the early logging in our area.

Of course, what is a visit among horse-friends without a little horse work?  We shared a favorite activity with Jay and Janet….log skidding with Solven and Brisk, Norwegian Fjords, to get in a little firewood.

Doc and I consider the time spent with these great people valuable to not only enjoy their company, but also to exchange ideas and to take time for recreation as well.
Thanks Baileys for taking the time to ‘stop by and see us’ at  Doc Hammill Horsemanship, here in Montana.

For the past several years, Cathy and I have spent the Fall months on the road…

doing what we love … offering Workhorse Workshops to students in Oregon, Washington, and California, and providing personalized instruction to students and their horses on their own farms.

The workshops have turned out to be wonderful events for us, the hosts, and students alike. These recurring Workhorse Workshops are being hosted in some amazing places … most of them are horse-powered organic farms. The working farms are perfect environments for hands on learning, with remarkable owner hosts who co-instruct with us. Thanks to our hosts the students get to work with outstanding horses and a wide variety of equipment. Opportunities for learning, networking, and sharing are endless.

Cathy and I would like to share some of the experiences we’ve had during these times. Keep an eye on this “What’s New” section of our website — we will offer educational insights where it makes sense and share photos and commentary from the workshops, private lessons, and training sessions.

We are honored to work with so many enthusiastic and dedicated students. By teaching people to better understand, communicate, and interact with horses, we are also following our passion of helping horses have better lives.

Check back often, you might just see yourself or someone you know!

Here is a fun video taken during a lunch break at our Horse Logging Workshop in September, 2011.

The students are the musicians!

Tom Triplett, (Doc’s mentor and step-father) along with his wife Betty,  cared for  Jay Jay, Cathy’s Welsh pony, for the last 2 years.  We all thought he would be a good cart driving partner for Tom.  Jay Jay enjoyed life with two standard Donkeys, and being cared for by Tom and Betty.  In the winter of 2011, we all agreed that Jay Jay might benefit from living on the wider open spaces at Therriault Creek Ranch with Doc, Cathy,   their horses, and mule for a while.

Tom knew that if Jay Jay was to live on a ranch, he best be ready to do ranch work.   Tom didn’t figure that the light driving harness that Cathy had for Jay Jay was a proper ranch harness. So he made a work harness for Jay Jay.  This one is complete with wooden hames that belonged to Tom’s father.

﻿In the photo at left, Tom is adjusting Jay Jay’s new work harness.  This harness is complete with:
Tom, taking Jay Jay for a spin in his new harness:

Duchess and Misty are celebrating important Birthdays this week. Duchess turns 29 June 1st, and Misty turns 27 May 27!
We feel very blessed to be in the lives of these two magnificent creatures.

Misty has been with Doc for most of her 27 years, working in various occupations. For the last 12 years, she has been a reliable staff member of Doc Hammill Horsemanship, working as an instructor for begining and advanced students. Misty has  taught hundreds of students to drive. She has also co-starred in several of Doc’s Instructional Horsemanship DVDs. Misty is still a regular instructor at Doc and Cathy’s Montana Workhorse Workshops, and will be working with students again for the 2011 Workshop season.

﻿﻿
﻿﻿﻿﻿﻿﻿﻿﻿﻿﻿﻿﻿﻿﻿﻿﻿﻿﻿ ﻿﻿﻿ ﻿Duchess, a Suffolk Punch Draft horse, started life at Mountain View Farms where she and her sister Delilah were born.  These two became the leaders of the Mountain View hitch of six Suffolks and were shown extensively in Washington and Oregon. Cathy acquired Duchess and Delilah when their earlier owner retired; these two taught her a lot about driving.  Duchess as a single has been Cathy’s ‘Go-To’ horse for many years now; always having been easy to work with and ready for a parade, some field work, log skidding, a county or state fair, plowing the home garden, a buggy ride, or teaching people to drive. Duchess is the kind of herd leader that Mark Rashid talks about..a leader that gained the respect of the rest of the herd through her quiet, strong leadership. Duchess is retired from most physical aspects of ranching.
﻿﻿﻿﻿﻿﻿﻿

From Doc:
Spring returns as quickly as it left, and the snow’s moisture has made the pasture lush. Barney (to the left) is enjoying the new grass and has declined to be photographed.

The yellow flowers are not dandelions; they are a small alpine lily.

From Doc Hammill:
Weather changes rapidly in the mountains. Saturday it was a warm 83 degrees. Saturday night winter came calling!

Not to worry. Spring will return just as quickly.