Hello. Here is a brief description of how we introduced a particular horse to some new implements. The horse, Belle, is a Suffolk and there are some earlier posts about her training on this blog. Anyway, Kris and I had been working her up to actually pulling real farm implements by skidding a small tire for short periods.

I occasionally would sit on the tire to add some weight and change the ‘feel’ of the pull for the horse, making sure to not overwhelm her with too much weight for too long. When we actually had some real work to do over the past few days, Kris drove one of our broke horses and I drove Belle along to investigate and later, if she was mentally ready, to participate. With each new implement, I first lead Belle to it to investigate, lead her along behind and to the left, right, and front of the implement as Kris and the broke horse worked, then ground drove her as I had lead her above. If she was mentally ready, I then hitched her to the implement and Kris lead her while I drove.

Kris gradually dropped back to Belle’s shoulder and then as all was well stepped aside to let Belle work by herself. I had the lead rope tied up to the hames so if Belle needed more mental ‘support,’ Kris could easily get control of her head with the halter.

Of note, I would not try this technique on a horse that didn’t have a solid foundation of training that Doug describes in his DVDs on starting colts. The horse has to accept you as their leader and be responsive to the halter. Even with a horse with a solid foundation as Belle has, we were very careful to make sure she was comfortable with each step in the process, and would have backed off if things escalated to where we were beginning to see signs of discomfort, fear, or flight potential. 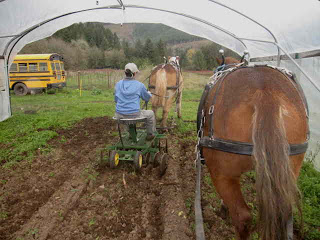 Also, I would not try this by just leading the animal, someone needs to be on the lines. Here are a couple of pictures of Kris driving Jerry on the disc, while I drive Belle along with them. She did well with this introduction but, since the disc is a pretty heavy pull in our deeply tilled hoop house, I didn’t think she was ready to pull a load heavy as this. 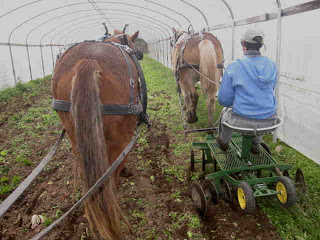 A couple of days later we started Belle pulling a section of spring tooth harrow. This is a good starter implement, because you can vary the draft by adjusting the depth of the tines. I started her very light and gradually increased the draft to a moderate amount for a single horse. As I worked her, I changed the draft from time to time, to give a different ‘feel’ on the collar for her. As you can see we lead her initially, then dropped back. I also only worked her for about an hour with lots of standing time and praise. 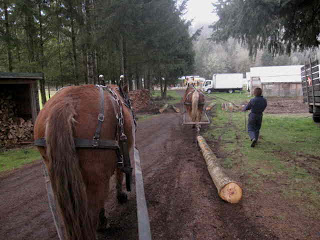 Here is Belle’s first experience skidding logs. Kris is driving Ray, our grouchy yet excellent mare, skidding small poles to the wood pile. As you can see, I am leading, then driving Belle, getting her used to the sounds, visuals and smells of skidding, as well as the fact that the longer poles are a different experience than a shorter harrow and can kick up brush and debris in sudden and strange ways. 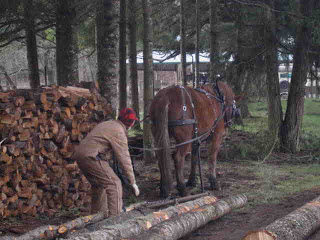 Later Kris and I hitched and successfully skidded some of the lighter wet Doug Fir. 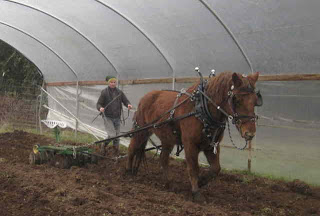 Here is Belle now working on the disc. We broadcast peas and oats in the hoop houses, then disc it in with the groffdale disc. If you don’t sit on the disc it pulls real light.

I did a lot of short pulls and Kris walked ahead for much of the time for support. She did not stand as well as I would like when facing the barn but overall, for her first time I was pretty happy. At one point, we were standing inside the green house. I was adjusting the lines and accidentally hit the top of the hoop house with my bamboo stick causing a loud noise and plastic movement over her head. She got pretty alarmed and jumped forward, but immediately stopped with whoa combined with line pressure (her bit is tied to her halter in such a way to minimize pressure on the bars, so it functions like a halter more than a bridle; a trick Doug showed us at a past workshop). After she stood for a while we kept discing but she was still a little worried, so we unhitched the disc and ground drove her back and fourth thru the hoop houses until she was calm again. Then we went back to discing in a relaxed manner.

These photos were taken after that.

One thought on “Introducing a horse to new implements”