Balyn, a 30 something former Californian, has been gardening and farming for more than 15 years.  All of his early gardening and farm work was on fairly small scale family and market gardens.  These gardens were cultivated by hand or with minimal tractor work to assist the human power.  Balyn’s interest in gardening and farming intensified while he was studying agro-ecology and environmental studies as a student at the University of California, Santa Cruz in 2004  http://casfs.ucsc.edu/.

In 2012 Balyn and wife Elli  began working as farm managers of  WHOA (Work Horse Organic Agriculture), was a non-profit organization that grew food for donation to Sonoma County (California) agencies serving people who do not have access to or could not afford fresh, wholesome, healthy organic produce.  WHOA also advocated, promoted, and supported working farms and gardens in a sustainable way with horsepower.

WHOA’s Mission statement:  “To produce the best and healthiest food possible and deliver it free of charge to people who cannot afford the high price of organic food commanded by retail outlets.”

Work Horse Organic Agriculture, Inc. (WHOA) is a 501(c)(3) non-profit that was established to promote the use of draft horse farming to support sustainable and organic agriculture in Sonoma County.  All food grown by WHOA was given away to organizations in Sonoma County that served people who did not have access to fresh organic produce.

Working for a non-profit organization with the slogan of: “The best food money can’t buy!”

was a truly rewarding endeavor for Ellie and Balyn. In 2011, at the urging of the Gelsman Family,( WHOA founders),  Balyn spent time with 2 two young Doc Hammill protégés and organic farmers, Ryan and Adam, who own and operate New Family Farm near Sebastopol, California. At the time, their sustainable farming practices included using draft horses rather than motorized equipment to work the land. There, Balyn observed Ryan and Adam work their Belgian draft team doing cultivation, planting, and harvesting. Eventually, Balyn spent some time working with the New Family Farm horses with Adam and Ryan.

In July of 2012, Balyn spent a week in one of Doc Hammill Horsemanship’s five-day Workhorse Workshops at Therriault Creek Ranch near Eureka, Montana. During the intensive, immersion-style workshop, Balyn learned about the nature of horses’ learning, their body language, their emotions, and behaviors.  Balyn and co-students also worked horses doing many hands-on activities, including harnessing, collar fitting, ground driving single horses and teams of two, driving singles in two-wheeled carts, and hitched to plows and other cultivation equipment.  The students also hitched and drove teams of two-horse teams on wagons, a Pioneer Homesteader, and various other pieces of farm equipment to give them a well-rounded intensive experience of working and driving horses in harness safely and comfortably.

By 2012, WHOA operations were centered on an 11 acre patch of fertile ground in Sonoma County, California.  As farm manager, Balyn, built infrastructure on the new WHOA farm and began produce production. In the Fall of 2012, WHOA Farm acquired a team of Haflinger geldings and a Percheron mare to help out with cultivation, planting, harvesting, as well as other farm chores.

After the horses arrived at WHOA Farm, Balyn and the Gelsman Family called upon Doc and Cathy to continue with their mentor-ship of Balyn’s natural horsemanship and teamster skills.  Doc and Cathy made on-farm private instructional visits to WHOA FARM, where they have coached and mentored Balyn as he encounters new opportunities while working with the horses.  Doc has worked directly with the horses as well.  Balyn continues to cultivate and grow his horsemanship skills by taking advantage of  Doc’s long-distance coaching and mentorship opportunities, Doc’s instruction horsemanship DVDs, and ongoing workshops.  In 2012, WHOA  sponsored a  Doc Hammill Horsemanship Driving and Working Horses in Harness Workshop in Sebastapol.

In 2016, Baylyn and Ellie established their own organic farm on the Olympic Peninsula, JoyFarm. 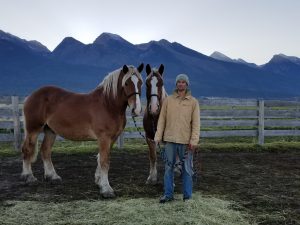 Balyn, with Bud and Bruce, a Belgian team, stopped for an overnight visit at Doc and Cathy’s  Borderland Ranch in Montana, on their way home to Joy Farm in Northwestern Washington. 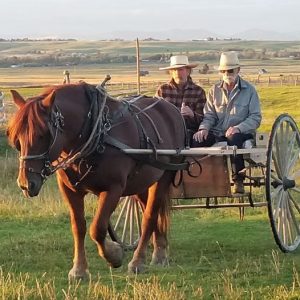