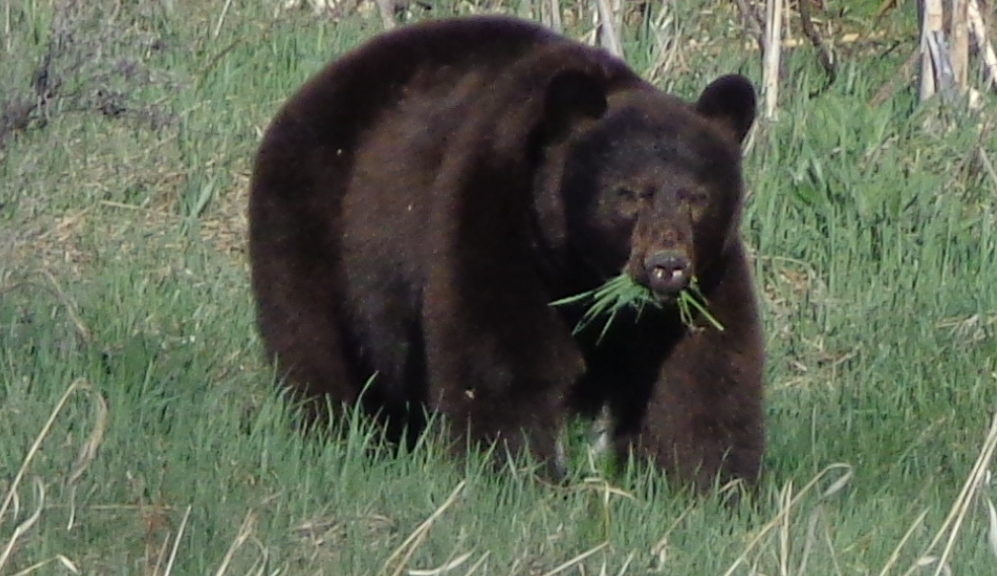 This spring day in April of 2013, Doc was working Ann and Shelby, Suffolk Punch mares, hitched to a forecart, driving around tracks on the ranch near Eureka, Montana.

He noticed Shelby’s behavior was ‘off’: she was snorting, distracted, and not her usual calm self. We know  “horses think they always have a good reason for their behavior” so we look for what could be bothering them. While staying seated on the forecart, Doc looked for clues to her behavior:  on her bridle, on her harness, with her teammate, checking the hitch setup, but he saw nothing unusual. Cathi was nearby on the ground looking for photo opportunites while Doc worked the ‘Girls’.  She noticed the nice BIG BLACK BEAR grazing in the lush grass near Therriault Creek and pointed it out to Doc.  It became evident that the Bear was the object of Shelby’s attention.

Northwestern Montana has  abundant bear populations so both of these mares, actually all of our horses, have seen Black Bear and Grizzly Bear while grazing in their pastures, and paddocks.  Much less frequently have they seen them while they (the horses) are harnessed and working. We believe horses see every situation differently…so even though they had seen bears while grazing …not having seen them while they were harnessed and working was a new situation, and caused upset to at least one of the horses.

Shelby’s concern over the grazing bear gave Doc the opportunity to  remain a reasonable distance from the bear, and let both mares observe it grazing.  We have learned to zero in on cues from our horses that tell us they are concerned.  We always ask them to WHOA when we see this, so that stopping when concerned or worried becomes the response.  We give them the time it takes to figure out what is happening. Doc used the approach and retreat concept to get the team closer to the bear, then when relaxed, he would drive them away from the bear.  It is our goal to manage the  horses’ behavior for comfort and relaxation. Doc also remained calm,  and emotionally neutral.  He of course thoroughly enjoyed the opportunity to see this beautiful bear, and the opportunity to help Shelby become more relaxed at seeing at least this bear. Desensitization worked here for both the horses, with time just standing and observing, and moving the team to different locations where they could still observe the bear’s activity allowed them to become comfortable with the sighting. Shelby’s teammate Ann, remained relaxed during this entire time.  Doc believes that Ann’s calmness contributed positivly to Shelby’s positive desensitization.

Cathy did not become completely desensitized to the bear sighting. Given that the bear was observed between the house and barn, Cathy chose to not walk, but rather drive her car to the barn and back in the several days following.

Doc Hammill’s decades of experience working equines in harness coupled with his never-ending quest to ensure that equines work more comfortably and safely, gives him an unequaled perspective on the teamster’s art.
Author and researcher, Jenifer Morrissey, an accomplished teamster in her own right, has artfully condensed many generations of wisdom from Doc, herself, and numerous other master teamsters and craftsmen in this unique book about harness and using it safely and well.

Now assembled in one place, this series of articles on harness and the teamster’s art by Jenifer Morrissey with Doc Hammill and Friends originally appeared in Rural Heritage Magazine. Introductory chapters include choosing a harness for your equine and understanding harness materials and styles. The key chapters on the geometry of harness adjustment and finding the ideal point of draft resulted from months of research and collaboration. Rural Heritage’s Publisher remarked,  “Our most extensive articles on the most essential aspects of draft horse driving. Jenifer Morrissey’s much researched articles cover everything you need to know to correctly adjust your harness and collars for the best performance and comfort.  Accompanied by very helpful photographs and illustrations. You will keep and reread these articles forever!” And now it is even easier to do that with the book, Harness Lessons With Doc Hammill and Friends.

order from Doc via